I'm seriously considering building a digital picture frame for the apartment.  There's the corner on the wall that would be perfect to have in the background of virtual meetings.  I searched Ecosia for some ideas and was inspired by GeekToolkit's Dynaframe. Well documented and functions perfectly for what I'm wanting to do. I need to check out a few of the others, but using an LCD panel with Raspberry Pi was exactly what I was looking for.  I don't want to have to make an actual wood/metal frame for it.  I just have to figure out how they mounted it.  Maybe some of the other videos would have that information or another approach that would be fun to try.  I do also like the idea of building a weather station into it.  We'll see.

Posted by CoolCole at 08:47 No comments:

I get it. I really do. There's a lot of pride on this country, and there's a lot to be proud of.  I also understand that there are so many countries that have it way WAY worse than us. And for people that come to this country looking for a better way of life, even if only a little better, this country is such a benefit to them. "Benefit," is likely not strong enough of a word in their mind, I'm sure.

That being said, I can't get over the history of this country.  I find history fascinating, which is one of the reasons I live in Philly.  The US, however, has a foundation built deep in theft and destruction of so many cultures.  On a podcast the other day, I heard a quote that shook me.  Basically the quote stated something to the effect of this country being literally built on stolen land and on the stolen work from slaves. Not just black slaves, but indentured servitude that was a life-long sentence, such as the Chinese.  In my own blood-line I see that land was stolen from my ancestors that were members of ancient American civilizations and then handed right over to other people in my blood-line that owned slaves.

It's incredibly complicated, I know. But it's difficult for me to see the declaration of independence from England as any more than a land-grab from the ancient Americans that lived here and thrived here before the English came along.

I do realize we take two steps forward and one step back almost every year here in the US so we are progressing.  But so many other countries have progressed so much further than we have. Well, except gun rights.  We have the monopoly on that one.  I'm glad, but I really would like to see us do better for people in need and to close the income gap.

Posted by CoolCole at 22:27 No comments:

I cannot WAIT until moving day.  Technically, it's not until Monday 7/5, but I might be able to get the keys later today and start moving a few things.  I figured I'd go up there tonight and use one of the augmented reality apps to see if I can virtually place my furniture before I start moving stuff up. It's only one floor, but I'd like to get an idea of what goes where before I start.

Why move only one floor up?  Because of the view.  For the past year, I've only had a view of a wall.  It's not terrible, but because I'm working from home, it's my only view.  It sucks.  Everything else about the apartment are fantastic.

Now, I still have to figure out how to remove the crown molding I put into place. I start removing it today and realized I was pulling the paint off.  I think I'm going to have to bite the bullet.  This might cost me a bit because it's tearing up the drywall.  That really sucks.  But, I figured it might do that when I installed it.  I was certain it wouldn't do that because of what I read online, but... well... lesson learned.  Now I just have to figure out how to mount the lighting in the new apartment without tearing up the drywall.

Posted by CoolCole at 17:21 No comments:

I cannot express enough how much I love YNAB ("You Need A Budget").

As I was catching up on my backlog of YouTube videos today, I came across this gem where they talking about data privacy.  It was in plain language and very customer focused.  Bottom line, they're not going to use or sell customer financial data nor are they going to sell usage data. Ever. Just not going to happen.

I've heard that before from other companies, ahem, Facebook/Google/Instagram, but this feels legit. They didn't release some legal press release, they recorded a video about it and posted it online.  It felt very much like a "not on my watch," attitude and I love it.

It made me think about what I want to do when I grow up (we're always thinking about the next big thing, right?).  If I were a millionaire, what would I want to do? If money wasn't a concern at all... I'd want to help people with their financial planning.  Not the investment stuff.  I would enjoy walking people through how to plan their spending; how to get out of financial holes; how to cut necessary corners to set their families up for success in the future.  I'd want to do that for the under-served communities.

Posted by CoolCole at 12:41 No comments:

As part of a newsletter I follow, Recomendo, I came across the After Life Experience archive. It's an amazing collection of memories from random people.  This reminds me of my "big idea" project.  Something I've wanted to do for years, but haven't quite mustered up the momentum to get it going. I'd also likely cry ridiculously doing it (no spoilers).

Listening to others' thoughts of "what memory would you want to be in forever" got me to wondering what memory I'd live in forever.  The thought came to me immediately and I know exactly how I'd word it. What drove me to blog today was the realization that I couldn't share it if my name is attached to it.  It's a lovely memory, but I don't feel confident that it would be joy to who is involved.  What's strange is that I have no problem sharing it with strangers, but I can't share it with friends.

Isn't that the opposite of the way it's supposed to be?

Why am I so dramatic sometimes? Lol.

Anyway - If you're reading this, please go give the site a listen.  It's truly one of my favorite corners of the internet now.

Posted by CoolCole at 16:38 No comments:

Got a new tattoo on Monday inked by the amazing Alexandra Fische. I'm so thankful to have found such an awesome artist through the Philly Vegan Facebook group when I got here.  Great conversation; inspiring aesthetic; insatiable work ethic.

The new design is the sister to the one Alex inked for me in 2018. 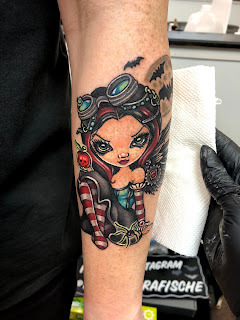 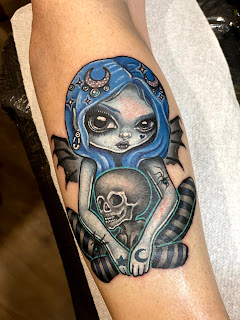 This is the new ink from Monday. A little lighter/calmer. Intended to be the nicer of the two dark sisters. I love the spiders.

Posted by CoolCole at 21:58 No comments:

Cruella and the American Diversity Problem

I watched Cruella in the theater today. It was fantastic! Definitely my favorite Disney film now. I’m really enjoying the villain series. This one even topped Maleficent in my option. Emma Stone portyaed the role beautifully. But what brought it together was the ambiance of the whole film. The costumes, the artistic wardrobe designs, the 60s style where old-school traditional met with new rock grunge. Truly magnificent. I also appreciate how the writers dealt with trauma. They were careful not to oversimplifying or over correct the outcome. That hair, omg. Spectacular!

The extended musical preview of In the Heights got me to thinking about diversity in the US today. So many cultures mixed throughout the states, yet we are often referred to as a great Christian nation. Why do so many people here have to normalize their own outlooks and lifestyles on others? It’s expected that everyone is to accept that churches exist to help the poor, but often the same members shun those that don’t share the same political opinion, or dietary desires, or sexual orientation. So many things. And there are so many different types of churches too. I would challenge any of the southern Baptist churches I grew up around to prove that all their beliefs are the same, yet they shun others who are different. I feel like I expanded more on this in my head, but I want to keep the post short, I just don’t understand why more Americans aren’t accepting of others beliefs.

Posted by CoolCole at 22:05 No comments: